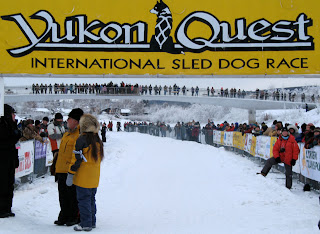 We headed north February 5th to arrive in Fairbanks the following day to help with last minute preparations for the 27th running of the coldest and toughest race on earth, the Yukon Quest, although this year the race is not expected to see extreme temperatures. Friday night, we met with our daughter Josea, the Race Manager (see the article: http://www.ktva.com/alaskanews/ci_14263734), and a few of her volunteer logistics team members, to add the finishing touches to the dog team staging area. Josea's team, as well as many other Quest volunteers, had been working hard for weeks, even months, to prepare for the 1000 mile race which covers some of the remote stretches of the Yukon River valley first explored before the discovery of gold in the Fortymile, Birch Creek and Klondike regions nearly 150 years ago. Not much has changed in some of this country since that time.
The following morning, Saturday the 7th, we met several hours before the race to take care of last minute details, meet other volunteers, visit with some of the racers and get the race underway. Lou and I helped with security along the crowd encroaching race shoot which stretched for perhaps 1/4 mile or more on the Chena River in downtown Fairbanks. The first of 24 race entrees hit the trail at 11 am with teams following every 3 minutes until all were out headed for the first checkpoint in Two Rivers. After all racers were out, the logistics team broke for lunch and last minute preparations before heading up the road to the nearest checkpoints. We left for Two Rivers in late afternoon but arrived after all but one racer had arrived. The pace had been established...FAST. Fourteen teams were resting at Two Rivers, one just down the trail and 9 teams had blown through headed for Chena Hot Springs and Rosebud Summit just beyond, with Zack Steer leading. We returned to Fairbanks for dinner and rest before heading to the next checkpoint at Mile 101 on the Steese Hwy.
Posted by Chicken Gold at 10:05 PM