Gold was discovered in the Fortymile River country long before the famous Klondike gold strike. As early as 1881, prospectors had found gold here. Discoveries in 1886 on Bonanza Bar and later Franklin Creek sparked the first rush to the interior Alaska. In the early days miners and prospectors walked, rafted, and rode horses to get to the Fortymile country. In winter they used snowshoes or sleds pulled by horses or dog teams. They mined by hand, using shovels, gold pans, rocker boxes and sluices. Trails developed and communities like Franklin, Steele Creek, Jack Wade and Chicken sprang up. The population rose to 1,000 and, for a time, the Fortymile Mining District was the richest mining area in the Yukon valley. After the initial rush to the Klondike, a second wave of miners arrived, using steam-powered shovels, dredges, drag lines and later bulldozers. The first dredge brought into the Fortymile Mining District was the Butte Creek dredge also known as the Russell King dredge, and later, the Jack Wade dredge.

The Jack Wade Creek dredge was originally known as the Russell King dredge after the man who contracted to have it built.. It was manufactured by the Risdon Iron Works of San Francisco in 1906. It was shipped to Skagway, then onto Whitehorse via the White Pass Railroad. From there it went down the Yukon on a paddle wheel river boat to the encampment of Fortymile at the mouth of the Fortymile River where it waited until the Fortymile froze. In the winter of 1907, the crates were freighted on sleds up the Fortymile, and South Fork to Walker Fork and finally assembled on mining claims at the mouth of Twelve Mile Creek on Walker Fork.
Unfortunately Russell King proved to be a better promoter than prospector and the dredging operation was abandoned in a couple years. It sat idle until 1912 when it was dismantled and relocated by horse-drawn sleds on the South Fork of the Fortymile River between Uhler Creek and Franklin Creek until the pay streak ran out, when it again was  abandoned on a gravel bar just above Franklin for 22 years.
1934, renewed interest in gold mining inspired Ed Holbrook and North American Mining Co. to move the dredge with sleds and small gas driven tractors to Wade Creek. They replaced the old open-connected bucketline with a close-connected line, which required flying 32 new buckets, weighing 700 pounds a piece, individually from Chistochina one bucket per load. The dredge started mining on lower Jack Wade in 1935. In 1939 it was sold, moved to upper Jack Wade and converted to diesel. The headline was replaced with a spud. However it still had the original rope drive, so when the rope frayed, none of the crew could splice the rope. But the worst problem was a cracked ladder that they repaired with steel beams. But the manor in which it was repaired concentrated the stress at the ends of the reinforcement. In the middle of the night in August 1941, the ladder broke and fell into the pond. It was that winter all the gold mining in the US was shut down for World War ll. The Jack Wade dredge was never re-started after the war.
Until 2007, the Jack Wade dredge was one of the few remaining historic monuments to Alaska's 'golden' years, the foundation of modern Alaska; a monument that was very visible, tangible and accessible. All but a few of its salvaged parts are gone as are most of the placer miners that built and operated them; all ghosts of a remarkable era. This picture was taken on the dredge's 100th birthday, the last year of it's remarkable life in the Fortymile: 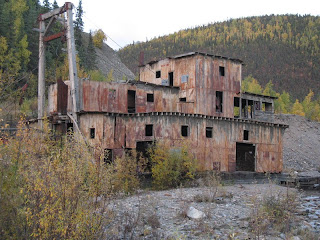