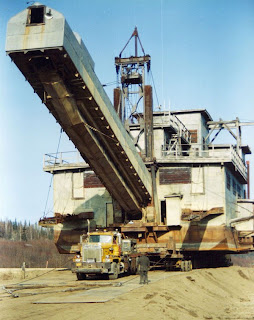 The Pedro dredge was manufactured by Yuba Manufacturing Co. of San Francisco in 1938 (dredge #133) and shipped in pieces from Oakland to Seattle on the SS Point San Pablo on April 1, then c/o the Alaska SS Co. to Seward and then to Fairbanks on the Alaska Railroad. It was delivered to Pedro Creek, 15 miles north of Fairbanks where it was assembled and began digging on July 11, 1938. It continued to work on Pedro Creek until finishing operations there in October 13, 1958. It was disassembled and trucked to Chicken Creek where it worked from September, 1959 until October, 1967
The Pedro dredge is a self-contained diesel-electric powered gold processing and recovery machine, a stacker dredge of conventional design. It is one of two of F.E. Co.’s pontoon style dredges with the hull made up of various sizes of separate pontoons. Its barge-like hull is constructed of 24 steel pontoons with a combined weight of 225,101 pounds. The hull is 85 feet long, 44 feet wide and 6.5 feet deep not including the side mounted pump houses. The 2 story superstructure is a steel and wood frame enclosed with metal sheathing which houses the engine room, main drive room, screen house, gold recovery tables and winch room. The dredge, when fully loaded had a draft of 5.5 ft and displaced 500 tons. 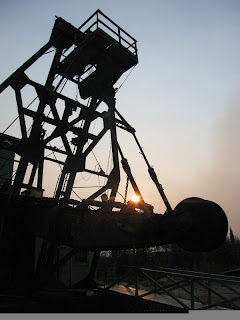 The electric dredge is powered by two Cat D375 diesel power plants with 480 volt, 185 KW generators. The bucket line, which is composed of 65 three cubic foot buckets, is driven at 29 buckets per minute around the 55 feet long digging ladder by the 40” diameter upper tumbler made of nickel chromium steel and turning at 4.7 rpm. The lower tumbler, four feet in diameter, is made of manganese steel. The dredge has two spuds for anchoring and “walking”, each 36 feet long and weighing 13,430 lbs.
The dredged material is emptied from the buckets into a hopper that feeds a 30.5 feet long x 5 feet diameter trommel screen turned by a 25 hp motor. The fines passing through the screens pass across 1360 square feet of recovery tables. The steel transverse tables are set at a grade of 1.25 inches to the foot and the longitudinal tables are set at 1.125 inches to the foot. The boxes are all equipped with standard iron shod or rubber shod trap riffles and expanded metal over coco matting. On the bow side of the hopper is 100 square feet of save-all tables for processing the material spillage that misses the hopper. Water is pumped to a spray manifold running through the screens and to the recovery tables by a three pumps: a 50 hp high pressure 8” X 10” pump, a 30 hp high pressure 6” booster pump and a 30 hp 8” X 10” low pressure pump, all of which are primed by a 5 hp 3” pump. The operating flow rate for all pumps is approximately 6000 gallons per minute. The oversize material from the screens is deposited behind the dredge by an enclosed stacker housing a 2.5 feet by 80 feet conveyor driven by a 25 hp motor running at a maximum of 308 feet per minute.
The dredge is equipped with four line winches, a ladder hoist winch, two spud winches, a 7.5 hp jitney winch, 3 hp foot bridge winch, jib crane, 400 amp Westinghouse welder, miscellaneous mechanic and black smith tools, grease pumps and fire equipment. One of the pontoons houses a 18hp Kewanee oil-fired boiler which was used for heating the digging ladder, stacker, main hopper, recovery tables and save-all as well as cutting ice from the dredge pond each spring. The heat allowed for early spring and late fall operations. 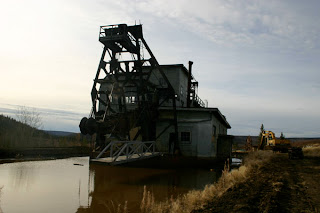 The Pedro dredge produced around 58,000 oz  of gold during it’s time on Chicken Creek, which would equate to roughly 50 million dollars today. The dredge shut down in 1967, locked and  boarded up until 1998 when it's ownership changed. It was moved about one mile down Chicken Creek to its present location at the Chicken Gold Camp. The dredge was listed as a National Historic Site in 2006 and opened to the public. In September of 2009, it was moved again, but only 150 yds, to provide room for a thaw field display to be added in the summer of 2010. The dredge has finally found its permanent resting spot. 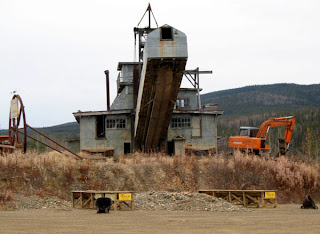