Returning to Chicken each March/April  from our home in Homer or some other farther place has been an annual event for 31 years. Typically, it starts with a loaded down truck and trailer leaving Homer in a spring coastal snowstorm as happened yesterday, and takes anywhere from 14 hours (fast trip, few stops) to almost 24 hours (lots of stops, mostly in Anchorage). It sounds like a horrendous endurance drive, but I usually find it one of the most satisfying events of the year. Why? There are a couple of ingredients to this 600 mile spring trek north that set it apart from some ordinary cross country trip. I'll try to explain with a description of yesterday's journey.

As most long trips with heavy loads start, there was a few last minute additions, hooking up the trailer, checking lights, cinching straps, checking the list and finally off and within a block of leaving, an anxious thought that maybe this load is too heavy for the trailer, or maybe I should have re-greased the beaings, or a few other possible thoughts of paranoia. But after a few miles, the concern wanes and the road takes control. Yesterday, the trip north started in a coastal snowstorm, but having checked the weather at 3 or 4 locations going north, it sounded like just a coastal event with better weather farther north, which is usually the case in the spring and one of the reasons I like heading to the Alaska's Interior at the end of winter. The transition from winter to spring is more clear cut away from the coast.

The worst part of this 600 mile trip is usually Homer to Palmer with Anchorage scoring the highest on the "worst" scale. But there are several redeeming factors in this first leg, the incredible spring beauty of the Kenai and Chugach mountains, the allure of the Kenai River and the occasionally splendid drive along Turnagain Arm, with the world's second highest tidal change. Yesterday did not disappoint. The Kenai River begged me to take pictures in several places; the shores still fringed with ice, the fresh heavy snows capping the back-drop rugged mountain crags, and here and there a chest wader clad fisherman, just visible in the half sun and half fog tapestry. But I traveled on tasting the changing scenery as it unfolded until I reached Turnagain Pass, with it's snow loaded ridges just emerging from low clouds. I stopped briefly to take it in and snapped a quick picture of others taking it in... 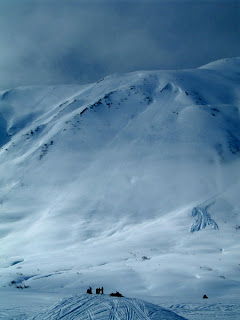 The drop from the mountain pass to Turnagain Arm and the next 45 miles driving along muddy icebergs racing with the out pouring tide was stunning, but the traffic and speed picks up as Anchorage is approached. For the next how ever long until I find myself leaving Palmer, the traffic and the masses contribute to why the rest of the trip is so magical. From Palmer east and north driving between the Talkeetna Mtns to the north and the Chugach Mtns to the south and then skirting the Wrangels before crossing the Alaska Range to the Tanana River valley and the Interior, the traffic rapidly thins out until finally leaving Tok and heading north up the Tayor Hwy, I find myself alone heading into a twilight on the northern horizon quite often changing into the faint dance of the Aurora or a ghostly moonscape. 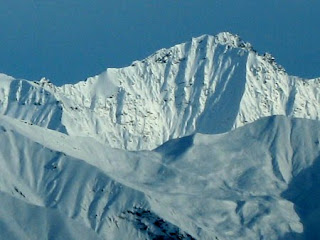 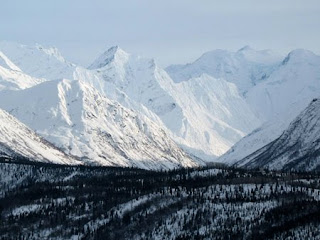 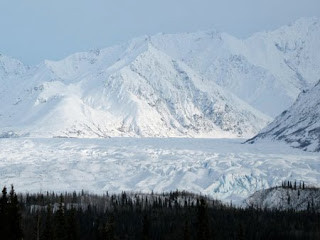 The beauty on this part of the trip does not diminish and never disappoints. The vast wilderness, the emerging solitude of the empty road north, the quietness of this space combine to create a focus I seldom am able to find elsewhere. My thoughts find no interference from the rest of humanity. I feel akin to the migrating birds heading back to a magnetic destination, but alone, but not feeling lonely. I make more frequent stops once I turn north at Tetlin Jctn. to immerse myself in the space. The silence of the north in the late winter and early spring, combined with the dry, crisp mountain air and forever vistas enriches my soul. Like a lone wolf singing to the moon, I am home. 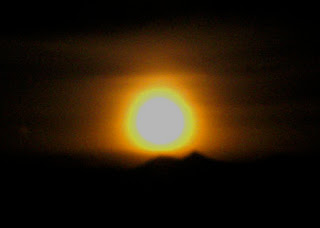