The Silence before Spring

Of the time that we spend in Chicken, late March and early April is my favorite. The Taylor Highway, which has been closed all winter, is very quiet in the first month after it is plowed open. There are really no visitors and the number of people residing in the area can be counted on a hand or two. The silence of the country has not yet been broken with the songs of returning birds and waterfowl. The caribou, though beginning their migration to the summer calving grounds, are seen but seldom heard. The river and streams, still frozen. yield no sound. No leaves are there to flutter in a breeze which seldom stirs until later in the spring. The squirrels and other resident creatures, have not yet started their courtship chatter. The ruffed grouse will not start drumming for several more weeks.

There are very few planes, no trains, only an occasional car or truck on the one and only road and no constant buzz or distant murmur from the machinery of man. The stillness is at once soothing, but also a bit haunting. We seem to grow accustom to a constant background noise in the all too civilized world to the point that removal from the buzz to a complete silence, or nearly such, at first creates somewhat of a light ringing in your ears as if there is some leftover noise in your head. It seems that you can actually listen to the silence or I find myself trying to anyway. The quiet landscape gives up a few barely audible sounds that would be hidden in most urban and even rural places: a few drips from the afternoon melting snow, a distant call from one of the few resident species of birds such as the grey jay, raven or chickadee and once in a while, the momentary stir of a light breeze, but other than that, almost "deathly" quiet.

With no TV, no radio, no phone, no dishwasher or washing machine, none of the sounds of civilized "on the grid" living filling the inner space of our home, it too is silent other than the crackling of the fire burning in the woodstove and the light tapping of my fingers on this noisy keyboard. We are not without a few electric tools and toys that require the occasional charging of batteries by a silence-breaking generator, but our use is light and short-lived. No doubt tomorrow at some point, I'll spoil it all with the running of some necessary contraption, but when I turn whatever it is off, the Silence will return, but only for a few brief weeks before the frenzy of returning birds and travelers, the croaking frogs, shrill drumming snipe and quacking ducks dim the silence until its return next fall. 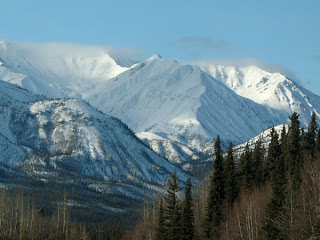