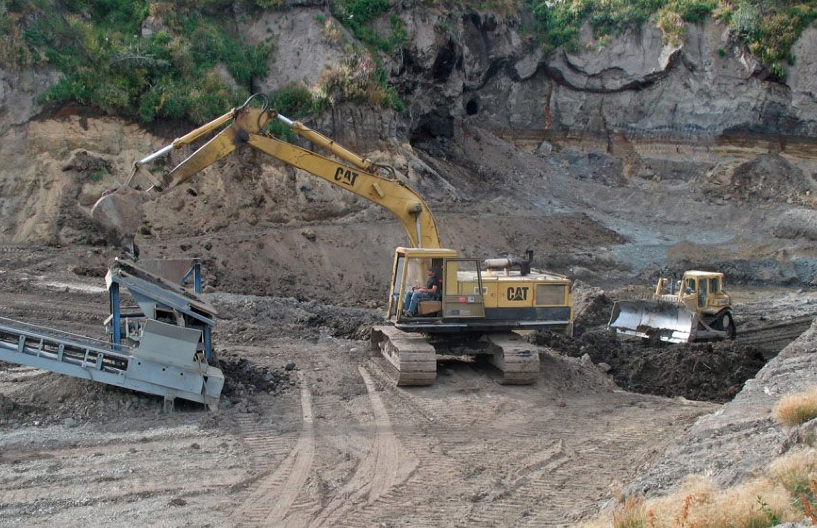 The original discovery and early mining occurred on the bench between Chicken Creek and Lost Chicken Creek. The bench deposit was initially mined by drifts run from shafts 33 to 53 feet deep.
The creek and bench gravels have also been mined by hydraulic, bulldozer, and sluice box methods. Lost Chicken Creek was one of the major gold producers of the Fortymile mining district in the early 1900's. Ground mined in 1902 averaged about $1 per square foot of bedrock at $20 gold. Placer gold occurs in the lower part of the gravel and on top of bedrock; the gold is mainly small, flattened pieces. Good-size nuggets are rare, but one weighing nearly 1.5 ounces was found before 1936. The fineness of gold mined from 1935 to 1936 ranged from 820.75 to 845.75 parts of gold per thousand and from 121 to 155 parts of silver per thousand.  A mean of seven assays indicates an average fineness of 842 parts of gold per thousand and 144 parts of silver per thousand; this is higher fineness than gold from the nearby Chicken Creek and Myers Fork placers. 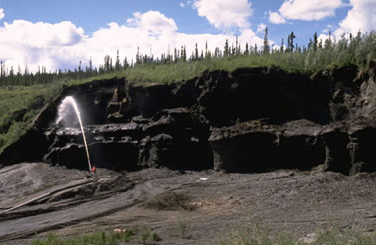 The rocks in the vicinity of Lost Chicken Creek are granitic rocks of the Taylor Mountain batholith of Triassic age and upper Paleozoic greenschist-facies metasedimentary and metavolcanic rocks (Werdon and others, 2001). These units have been cut by high-angle faults. The bedrock at the head of the creek exposed by placer mining is quartz diorite cut by a Tertiary basalt dike (Mertie, 1930 [B 813-C]). Quaternary alluvium and colluvium deposits are extensive in the valley of Lost Chicken Creek; they largely consist of gravel and lesser silt and sand overlain by muck. Placer gold mining of these deposits has exposed numerous Pleistocene mammalian fossils including rare birds, mammoth, horse, bison, musk oxen, Saiga antelope, Yukon ass, moose, elk, wolverine, saber-toothed tiger, caribou, collared lemming, an extinct American lion and bison. Placer concentrates mainly contain magnetite, ilmenite, garnet, jasper, amethyst, wood agate and zircon.

Lode gold in the Lost Chicken area Gold was detected in sheared and altered diorite or quartz diorite in a bedrock cut in the Lost Chicken placer gold mine Fortymile River area Alaska by HL Foster. Gold in bedrock only rarely has been found directly associated with placer deposits in the Fortymile River area and other placer districts of the Yukon Tanana upland. When the mine was visited in early September 1980 good cuts in greenish gray highly sheared diorite or quartz diorite were exposed about 2,000 m above the mouth of the Creek The rock contained abundant sulfides and much of it was stained yellow and orange brown. Six grab samples of bedrock were collected from one cut and analyzed for gold by RM O Leary using the atomic absorption method. Two of the six samples contained 0.10 ppm gold. Gold was not detected in the other four samples limit of detection 0.05 ppm. The samples which contained gold were stained orange brown and one had many visible sulfides. These bedrock analyses suggest that some Lost Chicken placer gold is probably locally derived from sheared mineralized diorite. 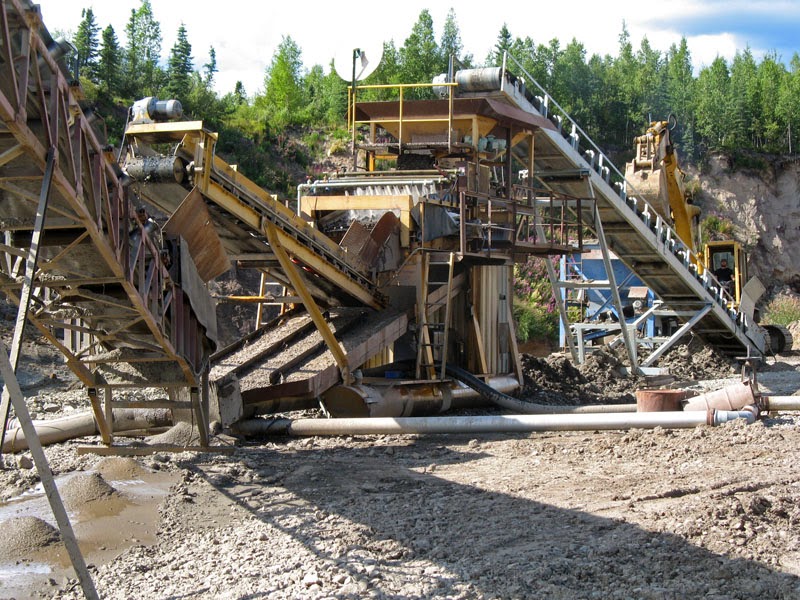 The “upper pit” at the Lost Chicken placer gold mine in east central Alaska contains fossils that provide information on the flora and insect fauna of interior Alaska just before the onset of global cooling at 2.5 million years. Fossils come from sediments interbedded with the Lost Chicken volcanic ashbed (dated at 2.9 ± 0.4 million years—early Late Pliocene) and portray the floodplain and valley of a small creek within a region dominated by a coniferous forest richer in genera and species than the present one. Climate was wetter and less continental, and there was probably little or no permafrost. At least one other Pliocene volcanic ashbed (the Fortymile tephra) occurs at the site and is also associated with plant and insect fossils. Among these fossils are extinct plants and insects like those found at other Tertiary sites in northern Canada and Alaska. The Lost Chicken sequence is the same age as the Beaufort Formation on Meighen Island, more than 1000 km to the north. Like Lost Chicken, Meighen Island sediments contain fossils representing a diverse boreal environment.

In 1994, we had the opportunity to lease the western edge of the Lost Chicken claim block. We spent part of that season stripping and mining one 'cut' which was over 50 ft deep against the hillside, but it was worth it as can be seen in the pans and jar of 998 oz below.